Skip to content
BUY ONLINE (SHIPS TO 9 U.S. STATES)
10th Special Forces Group are the unsung heroes who answer the call of duty every day. Art of the Spirits Whiskey is donating $6 for each case sold to Special Forces Association (SFA).
Art of the Spirits Whiskey Cask Strength “The Originals” Bourbon Whiskey is matured 3.5 years old in a new 30 gallon American oak barrel followed by a 4 month beauty rest in a 12 year old rum cask. This limited-edition release showcases world renowned Artist, David Uhl, and his oil painting which was inspired by the history of “The Originals”. The result is a perfectly balanced yet complex and layered cask strength bourbon whiskey that is truly extraordinary.

The 10th Special Forces Group was born in 1952 from the concepts established by the WW2 OSS. It was the first Special Forces unit created earning its name “The Originals”. Establishing its headquarters in Germany and sending personnel to Korea training anti-Communist North Korean partisans. Its mission was to conduct partisan warfare behind enemy lines in Europe. It created and adopted the Trojan Horse Badge and began adorning the Green Berets they wore, with them, creating the symbolic Green Beret. Members of the 10th have been involved in conflicts around the world ever since. The Belgian Congo and the training of Middle Eastern Special Warfare forces, establishing Jordan’s first airborne school Training forces in Yemen and Iran along with Kurdish tribesmen in the mountains. Training and operational support to the Lebanese Army and militias. Operation RESTORE HOPE in Somalia, to support the 1st Belgian Para-Commando Battalion and providing security for meetings with Somali leaders. Entebbe airfield, Uganda to provide assistance for the conflict in Rwanda, service in DESERT SHIELD/DESERT STORM, refugee aid in PROVIDE COMFORT I and II in the Kurdistan mountains. RESTORE HOPE lead the 1st Armored Division into Bosnia in December 1995 operating under the cover of Joint Commission Observers (JCO). In Kosovo the unit conducted some of the first Joint Russian/American Combat Operations against KLA insurgents. In 2001, selected members were deployed with their 5th SFG brothers for the initial operations in Afghanistan, and along with officers of the CIA’s Special Activities Division linked up and were the first to enter Iraq prior to the invasion organizing and leading Kurdish Peshmerga to fight. So raise your glass in a toast to all “The Originals” past and present who have stood ready to engage liberty’s enemies “By Any and All Means Necessary” DOL !! 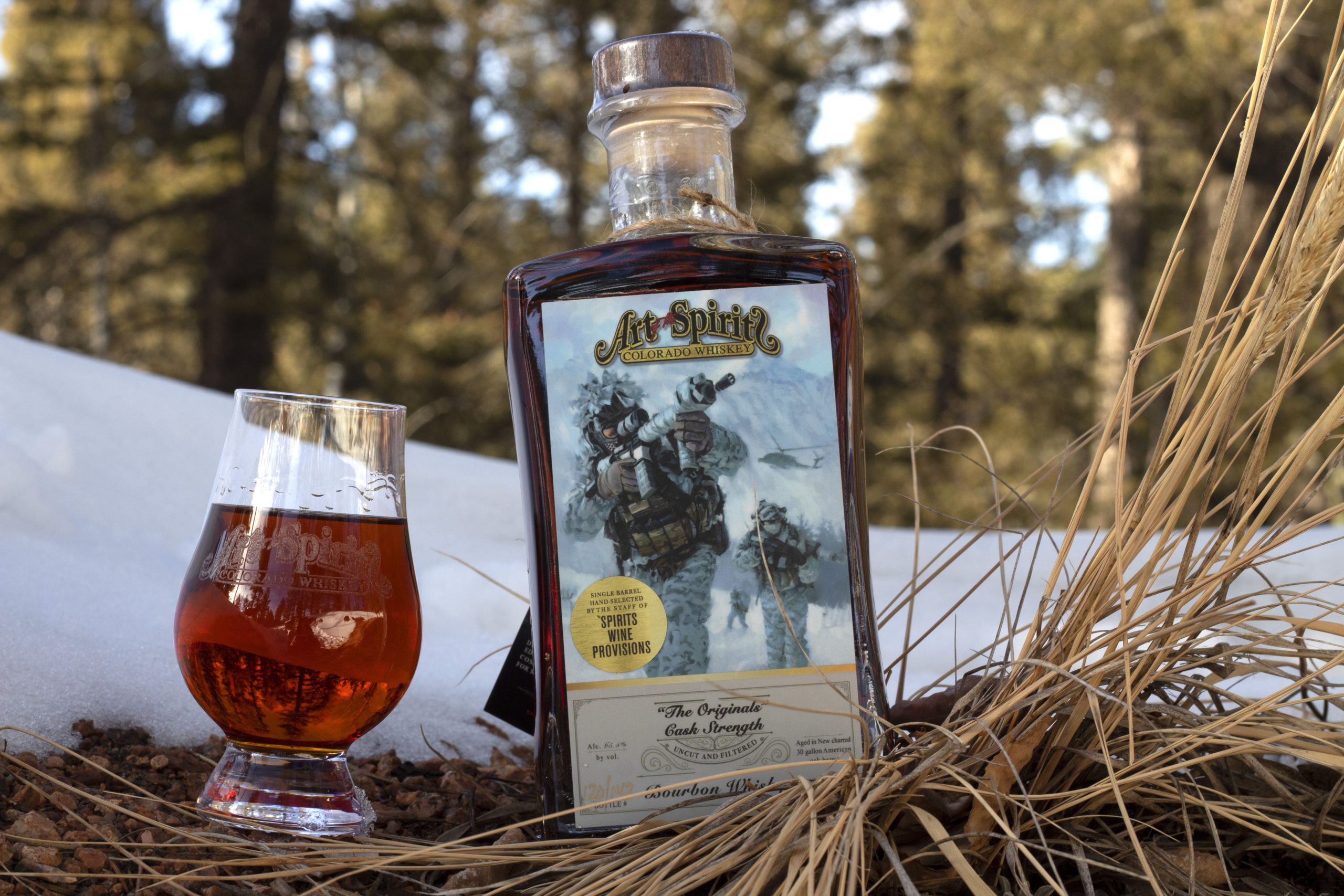 Art of the Spirits Whiskey Honors “The Originals”

“Silver Wings upon their chest….”

Once again, it is my pleasure to give you a review of the latest selection for Art of the Spirits. This one will start a little differently as I believe a brief history lesson is in order first. As a veteran of this great nation, anything patriotic or honoring the military gets an immediate “Shut up and take my money” response from me. This whiskey is no exception.

The labeling pays tribute to “The Originals,” the original Green Berets that is – now turn to page 10 in your military textbook.

“These are few of America’s Best…”

Originating in the early 1950s, the 10th Special Forces Group became active in Fort Bragg, North Carolina. Their mission was to conduct partisan warfare behind enemy lines in case of an invasion by communist forces in Europe. The Green Beret became an iconic symbol that they wore to distinguish themselves from the usual conventional Army. In 1962, President John F. Kennedy officially recognized their right to this uniform addition and ordered that the Green Beret be a “symbol of excellence, a badge of courage, a mark of distinction in the fight for Freedom.”

In the mid-1990s, the 10th Special Forces were relocated to Fort Carson in Colorado Springs, Colorado. It is here that this patriotic excellence not only lives but where Art of the Spirit’s created this fantastic bourbon.

This Art of the Spirit’s release (rumored to be a series…it’s tough to type with fingers crossed, by the way.) once again features the artistic mastery of Colorado’s David Uhl. Honoring the brave and fearless men who fight and sacrifice for this beloved country. This label epitomizes the excellence of this particular unit.

A cask strength bourbon aged three and half years in a 30-gallon new American oak barrel then finished two months in a 12-year-old Colombian rum cask. This whiskey is uncut and unfiltered, and finished at 64% ABV.

Now for my notes:

Color: Golden honey with crimson sparks when held to the light. Solid legs cling long on the glass.

Nose:  Sweet on the senses. Toffee with a bit of caramel apple

Finish: Super long finish. You’ll feel this one a while.

This bourbon is super high proof, 128 to be exact, so I have to be fully transparent in my review. A lot of folks don’t like the higher proofed whiskies and choose to steer clear. I believe it’s because they don’t know all the tricks to enjoy it. For me, adding a couple of drops of room temp water opened up an entirely new experience. After my initial tasting, I did the water trick and immediately was greeted by butterscotch and vanillas. The heat and finish calmed, but the great tastes remained. Hopefully, the point of this confession is to help those who fear the higher proof bourbons and show them there is a way to enjoy them without making them into a cocktail.

I encourage all to follow the Art of Spirits closely and to check out the beautiful pieces created by David Uhl. As I mentioned to Richard Paul, the Master Distiller, the bottles, and the bourbon have become my art collection to display long after the Spirit has been enjoyed. I can’t wait to add more to my “gallery.”